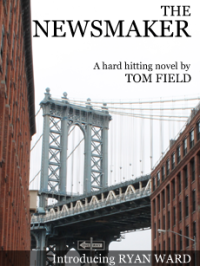 Ryan Ward knew that something was very wrong the moment he saw the carnage unfolding on the Paris Metro. Things were just too perfect. By the time he had seen the second explosion at Westminster Abbey, he knew that he was hunting much more than just a lone terrorist. Ward is the man who has no country, yet is the most efficient operative in the mystical team simply known as The Deniables, a team of the best agents that the CIA and MI6 has ever produced.

In pursuit of the terrorist, Ward discovers a dark secret that the CIA want kept buried. In a race against time, and as the body count piles up, the indications that the establishment are behind the horror becomes more and more apparent.

In part one of a seven story adventure, which moves in real time over six traumatic months, the moral question is set. Should good people do bad things to protect others.

The Newsmaker introduces Ryan Ward, efficient, ruthless killer and lonely, vulnerable man. Ward kills like a warrior without fear, and protects the weak like a mother protecting a new-born. His personal mission is to tear down the establishment and hold all of those who thought they were untouchable to account for their actions, and end their control. Definitively.